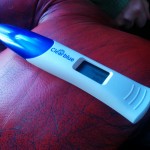 The drugs are working! It seems that magical Metformin is indeed magical. Since beginning to take ...