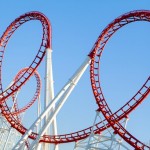 I’ve put off writing this post for a while. It’s been a tough week or so, and I am only just picking myself up after one of those loop-the-loop things with a big drop at the end.

Catching up from last time, my flashy smiley face continued for at least 12 days before I stopped counting. In the end I decided to try using a new kit in case I’d starting testing with the first one too early. This second kit showed 2 or 3 days of nothing, then starting flashing too. So to save money, I stuck with the second kit and took it on holiday with us for our #cruiseofamazingness.

It was now really more out of interest than hope. A sort of experiment, if you like. If the oestrogen got too high, would I grow a third boob? A second womb? What would the cruise ship staff do with my body in the event of an oestrogen explosion?

We’d been away for a week of our 11-night #cruiseofamazingness when it hit. A steady smiley face! LH peak! Ovulation!

Up we climbed, up, up up, wheeeeeee!

At first I thought the ovulation kit was broken. But no, after checking the instructions again it seemed to be a real result. Quick, #cruiseofamazingnesssex!

It would be perfect – the sea gently lapping at the boat, the champaign on ice – I liked the idea of conceiving at sea. And we were so relaxed. That’s good isn’t it? Everyone conceives when they are relaxed. Everyone. So we had much in our favour. A few days later I called my GP back in the UK to get my blood test results, taken at day 21 before leaving for the trip. Nothing.

Down we go, wheeeee!

But all wasn’t lost! If the ovulation kit was telling the truth, then we’d done the blood test far too soon. Cue much running around Bath upon our return from the #cruiseofamazingness to try to find someone who would take my blood. (As a side note, this was ridiculous. I’d had to quickly get over the fact that it wouldn’t be amazing nurse, as she was on holiday (who gave her permission to go?), but not only that, my GP couldn’t fit me in for another week, and there was no one who could take my blood at the RUH, Bath’s hospital. So I ended up at the walk-in clinic, where they “wouldn’t normally do it, but it’s a quiet day”. I then took the sample to the lab myself…)

This time I hoped. More than usual. And more was at stake now too – if the drugs had worked to make me ovulate, then I wouldn’t have to have the operation. I really don’t want the operation.

On Tuesday last week I was sat in a meeting at work when I got the call from the walk-in centre (another point to them – my GP never calls with the results). No ovulation. I was really gutted. This hit me harder than it has done before because of that hope, out there floating on the sea.

Down we go some more, towards a looming operation, wheeeeeee!

This time I cried. I had to keep it in for a while – about 4 hours during a frantic day. But then I found time to make a quick call to John, and I cried down the phone from my vantage point on the roof of the hospital in Bristol, where I work. He was great, as always. I think he’d decided that I’d have to have the operation back at the last fertility appointment in May, so in a way it came as no shock to him. I gathered myself together and went back to work. When I got home, I had the pre-operative assessment letter waiting for me.

The night before my pre-op, John and I went for dinner. It was date night, and we usually go for a meal and do the Telegraph cryptic crossword together. This has become our tradition. That night, things descended into a row. We were both tired, and I was grumpy, and yeah…

We have always been good at talking to each other about how we feel. I like to process things out loud, and John is very good at not letting me bury anything. The slightest hint of a problem and he’s on it, asking me what the matter is, lovingly but directly. I can’t get anything past him, which was frustrating at first, but I now see it as a blessing. It leaves no room for unresolved issues or passive aggression. I can honestly say we’ve never “let the sun go down on an argument“. (We’ll, it’s gone down, as we’ve sat and argued until 4am, but you get the drift). A pretty sunset from our #cruiseofamazingness

This night was no different. Things started in a row about circumstantial, superfluous stuff, and then wound up at the real issue. I was sad. And scared. Really scared. Not just of the pending operation, but also of what they may or may not find. The hopelessness came flooding in, as I contemplated never carrying a child in my womb, not knowing what it felt like when it kicked me in the middle of the night, never breastfeeding…

This is an overreaction to the circumstances we presently find ourselves in. We’ve only been trying for 9 months, and there are other things they can try before we get to adoption (though the lack of clarity about the options and stages of treatment is a source of anxiety for me). But the fear is there. Lurking.

We talked for a while that night about how we felt, and my emotional highs and lows compared to John’s relatively steady state. And John spoke some sense to me, firmly placing the perspective hat back on my fretting head. He’s good at that. It did feel good to talk it through, and I am so grateful for a husband with whom I can have such conversations, even in the midst of his own disappointment. I love his selflessness. He’s really great you know. He is greater than this smiley great white shark

Today was day 51 of this cycle. This is around the time I’d normally have my period, but it hasn’t arrived.

I’ve considered doing a pregnancy test since last weekend, but couldn’t quite bring myself to do it. This is the first time I’ve felt that way. Anyway, today I did it. I tried to approach it cynically, with little hope – it’s just to confirm that I’m not pregnant, rather than to tell me if I am. But that hope had already crept in. What if the blood test was wrong and the ovulation kit was right? What if being relaxed worked after all?

We had both secretly hoped.