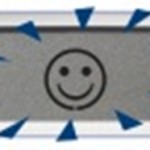 Finally, after months of

, this month I saw a Clearblue smiley face on my ovulation kit! This was the cause for much excitement, as it could mean ovulation is finally here.

However, of course it’s not that simple.

“Typically identify 4 fertile days, twice as many as any other ovulation test, so increases your window of opportunity to get pregnant.”

The way the kit works is slightly different from the normal ovulation kits I had been using (and decided recently to stop using due to the constant disappointment). Rather than just measuring luteinising hormone (LH), these new kits measure both oestrogen and LH:

So I should expect two days of flashy smiley face, two days of steady smiley face, and then a baby. As this was our last attempt with Clomid prior to the laparoscopy of doom, I figured these kits were worth a try.

However, the brief excitement at my flashy, smiling, digital breakthrough was swiftly followed by cautionary reading. Alas, certain medical conditions and medications can give misleading results. For example, if:

This last point was of particular interest to me, as I’m now on 150mg of clomiphene citrate (Clomid). So basically, before I could really get excited I needed to wait for the Peak Fertility days, with a steady smiley face – no flashing.

And this should occur two days later, right?

I am now on day 4 of flashy smiley face, and I am beginning to get the same feeling as when seeing the old

…though slightly sweeter I suppose.

I have had a little lookey on the internet, and there are others who’ve had a similar problem (warning – forum abbreviation overload! OPK = ovulation prediction kit, as my best guess). It would seem that these new kits are not as fantastic as they make out to be.

One explaination is that the drugs are interferring. The other is that the kit is picking up the oestrogen surge early, which is why it’s lasting a few days. Some people on that forum are testing twice a day (££££!), and seeing their steady smiley in the afternoon, so there is also a chance I could be missing mine, passing straight on through and then measuring the high oestrogen in the days after the LH peak. I have a blood test next Tuesday to check progesterone levels again. But I am also losing confidence in this method for testing ovulation, after speaking with a French gynaecologist yesterday who informed me they don’t do this blood test in France, due to its unreliability. She recommended I get scanned every day around ovulation to monitor progress/catch the egg release.

There are so many approaches, and variables. It makes my scientific mind ache. Even with the most advanced technology, it feels like 90% guess work. All we can do is make love and hope.

Some days, one is easier than the other.