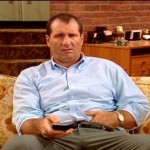 It’s been a while since I’ve posted. Which I think is indicative of the role I play at this point. Having proven that my swimmers are MIGHTY CHAMPIONS, and mastered the art of appropriately distributing them, there’s not really much I can do beyond making jokes in doctors’ clinics and being fantastically handsome. I have a role to perform, but I can’t do anything else to improve our chances. Leaving me with pretty much only one subject to talk about – and it’s a touch personal. That role.

When I was in my teens and 20s, and sex was something to aspire to, I remember being completely bemused by the running joke on Married With Children repeats where Al Bundy would go to such lengths to avoid having to sleep with Peggy. She may have had terrible hair and shoes, but that was still Katey Sagal! And now I realise, the man was just tired.

Sex takes on a slightly strange aspect when it becomes obligatory. It really seems that it should ideally be the consequence of a furtive glance, an accidentally dropped towel, or building passion. It’s less ideal when it’s because it’s Tuesday, and that’s “Day 12”.

Obligatory sex when you’re absolutely not in the mood is strange.

Fortunately I’m a very brave man, and even though it may not be on the forefront of my mind (again, my 20s would have been a far more appropriate time for all this…), I seem to be able to muster the energy and battle on, for the good of humankind. Yes, I’m very admirable.

But the reality is, as desperately as we would love to get pregnant, as important as it is to us, on some of those rare fertile days we simply can’t find the willpower to get started. And then you feel terrible! You’re wasting a chance, you’re letting yourselves down, letting your future spawn down, letting your doctor down… And oh boy, if there’s ever anything that gets me all hot and ready it’s aimless guilt! So you know today is one of the days, but you’re exhausted, and you already did it so many times in the last few days. You both deliberately avoid raising the topic, let the evening get away from you until it’s too late with an early start the next day, and pretend that you’re gutted and will make up for it tomorrow. And then go to precious, precious sleep.

And the 20-something me wonders what the hell is wrong with me.

(And to be clear, no, I don’t see Laura as Al saw Peggy! She’s gorgeous, and gosh what a privilege it is to try to make babies with her. But the idea of this blog is to discuss all the aspects of the process that people just don’t mention, and this seemed like an important one not to miss out.)

When you get pregnant, there are three main scans. There's the scheduled 12 week and ...