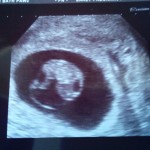 When you get pregnant, there are three main scans. There’s the scheduled 12 week and 20 week scan, routine and explained up front. And then the less often spoken about emergency 8 week scan that absolutely everybody has. We had our emergency unscheduled 8 week scan today.

We have a baby. With a heartbeat. This is rather exciting.

A running joke-that’s-not-actually-a-joke Laura and I have is that every time she goes to the toilet (47 or so times a day) she reports back to me, either by instant message, text, or shouting, “Still pregnant!” This information is gleaned from her forensic inspection of every wipe. (You can go “ew” if you want, but you’d do no different.) For the last five or so weeks of our knowing about being pregnant, Laura has checked those 47 times a day. Last night she checked, and for the first time, it wasn’t good.

You’re told that “spotting” is “perfectly normal” in early stages of pregnancy. But despite these assurances, you’re also told that at the first sight of it, to be Medevacked to the nearest hospital. It’s a somewhat mixed message. “Absolutely normal, but do panic.” Of course Laura couldn’t do anything as polite-sounding as spotting – she had to go for something involving mucus. She was in the bathroom off our bedroom, and with her usual decorum had left the bathroom door wide open (“You’re basically weeing in the bedroom,” appears to not deter this). I looked up and saw the panic.

As someone with a brain addled by anxiety disorder, and an ability to find panic in a box of cereal, I’m not sure from where came the calm and sense I displayed. “Perfectly normal” I quoted, steady, almost entirely believing it. In my head a miscarriage is like something out of a horror movie, where you have to change the carpets, so this delusion allows me to underplay something as ordinary as icky red goo. No pain, no blood on the ceiling, no need to worry – that was my entirely fatuous rationale. But it was what was needed in the moment, since it was late at night, and there was nothing we could do but sleep. (There was also much cuddling, soothing, and desperate praying.)

Come the morning, Laura called the midwife at 8.30am when they open, and was told, “Ooooh no, far too late for the drop-in clinic this morning, they’ll be full, wait until Monday.” Not enormously helpful advice since a) it wasn’t true, and b) I’m going away to the States for a week and a half tomorrow, so poor Laura would be left alone in the unknowing, and that wasn’t going to be okay. Fortunately Laura ignored her, called the Early Preggo clinic, and was told to come on in.

The clinic in Bath’s hospital is a peculiar place. Early Pregnancy is muddled in with those waiting for fertility appointments, which is just astonishingly insensitive. But it’s also used for other scans, meaning you have the oddity of many elderly patients, and those struggling to get knocked up, waiting in a room plastered with posters about pregnancy and babies.

The wait in there is long, and you end up playing a morbid game of working out who else is there to see if they just miscarried, by the looks of terror or misery on faces. We were three-for-three on that one. You then further attempt to work out if their news was good or bad as they emerge from the scanning room – a challenge we realised later was made harder by the nurse asking you not to be jubilant as you leave, as it can be upsetting for those with less good news. Which is a pretty cool thing for them to do, really, as in the moment of pure, uncorked relief, we’d never have had the wherewithal to think of that.

Before the scan you see the doc. We were so fortunate that the doctor we saw was possibly the most calm-inducing human I’ve ever met, somehow putting us at ease despite our terror. She tested Laura’s wee, then booked us in for the scan. Another wait, and then The Moment.

As I gathered coats and bags from the waiting room to go into the scanning area, there was a “This is it” moment in my brain. This is it. I’d flattened it all, from Laura’s panicked comment from the bathroom last night to that point, I’d not let emotions in, not allowed myself to consider the potential. At that point, I realised it was now – now we’d know if there was a baby, and if it was an alive baby. Then somehow, by the time I’d walked the ten paces across the waiting room, I’d forgotten again. Possibly self-preservation there, or I’d have gibbered into a puddle.

The probe went in, the sonar screen began showing wobbly grey shapes, and still it didn’t directly occur to my consciousness that I was about to learn if I was going to be a dad or not. And then on the screen, not fuzzy nor obscure as I’d expected (mostly from looking at other people’s blurry smooshes that they assure me are the baby doing its first samba), a perfectly clear baby-shape, and at the centre of it, with no question, a rapidly beating heart.

No one was looking at me, obviously. I cried without anyone seeing.

It hasn’t been real. I did my best to agree with plastic sticks and the lack of periods, but I didn’t believe it. Honestly, I had been preparing myself for our 12 week scan to reveal that we’d made an incredibly embarrassing mistake, and there’d be nothing in there. But in there, inside Laura, there’s a real actual human foetus, with a heartbeat, doing utterly impossible things like developing a circulatory system and knowing where the arms and legs go. I’ve wanted to have a child like a tangible ache since I was 25 years old. I’m 36 now, and it’s looking increasingly likely like it’s going to happen.

I can feel my brain changing, my priorities rearranging themselves like Laura’s organs, and the fifty ton weight of responsibility developing on my shoulders. It’s incredible. There’s a life in there and I’m already conscious of an uncontrollable love for it. All in all, I’m rather glad for a mucusy discharge, and this phenomenal new fear that is working its way into every part of my existence like a mad virus. If things continue this way, we’re going to have a baby.

We made a baby! Toby Walker was born on the 31st October, and is a beautiful, ...