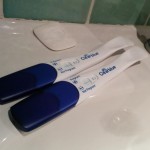 This blog was created for one reason: to talk about a thing affecting lots of people that is rarely discussed personally. We wanted to publicly share an experience that people often, for sometimes very good reasons, keep private.

We’d realised we felt like the only ones having trouble, while everyone else had babies falling out of them if they coughed funny. And it simply wasn’t true. There were so many struggles, so many people going through so much, behind so many of those pregnancies. So by talking about it openly, we wanted to create a place where people could look and know they’re not the only ones. They’re not alone.

Which makes the news that Laura’s now six weeks pregnant a wonderful but peculiar thing. Are we now part of the problem for those who are struggling?

I hope that our now being pregnant can be, rather than yet another kick in the shin for people trying, a sign of hope. We began with Laura’s ovaries being impenetrable bunches of cysts, a womb that didn’t do periods, and a genuine sense that having children might be something we’d never be able to do. It was something I’d always wanted and was having to contemplate may never happen, and it was something Laura had never allowed herself to want, and was now acknowledging that desire in the most dangerous circumstances. And we got here.

We’re a mess of statistics and worry about miscarriage. We’re extremely aware of the percentages, counting down the days until the next weekly marker where those numbers drop, as if they were representative of any individual. And in being here, I now entirely understand why people don’t say anything until they get to that Week 12 scan. It’s sensible. The more people you tell, the more people you’d have excitedly asking you how it was going after it had gone wrong, after the cells sloughed out in an overly heavy, delayed period. You’d have to live your grief so much more, in sharing it over and over with everyone you’d told. Not saying anything is a means to protect yourselves. The smart decision is not to tell people. 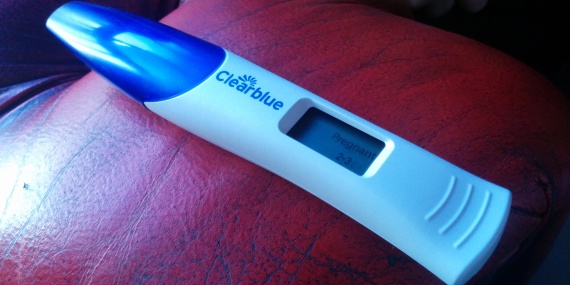 But it would also be a complete betrayal of why we wanted to write this blog in the first place. We’re making the daft decision to tell absolutely everyone.

We’re doing this because we want to share the reality of our experiences. If, horribly, Laura were to have a miscarriage now, it would be a part of the process we’re chronicling. A part we’re ludicrously over-aware is commonplace at this point. (God, the crazed abortionist madman, sees off 75% of fertilised ova, and 20% of those that reach the point we’re at – lunatic fundamentalists, how about bombing His clinic?) It would feel dishonest to appear on here after the fact, and say, “Yeah, we were pregnant but didn’t say anything, just in case.” I recognise this is not an ultimately coherent or pragmatic sense of mind, but it’s the one I have.

So yes – wow – Laura can get pregnant. That’s HUGE. Like her tummy will hopefully soon be. And if this doesn’t take, we are so many steps farther forward than we had dared to hope. We did the pregnancy tests to get the negative result out of the way so we could get on with our weekend. Laura had spurious inklings of hope, but nothing convincing, and I had no expectancy at all. Seeing the vertical blue line appear was so abstract in the event that neither of us could process it. We just talked to each other about hormone levels and false positives and all manner of ways to prevent ourselves from feeling hope. And damn, those tests are ambiguous-looking. I strongly recommend spending the extra £2 on a digital test that just writes the word “pregnant” on its tiny screen. That was the moment that convinced us, broke our defences down.

There’s a realistic chance that this blog will now become yet another pregnancy chronicle. And while I understand how that could be pretty galling for people still trying, it’s also always been the desired direction for the site to take. And it’ll finally give me things to say other than, “She’s making me have sex again.”

Good gracious, I might become a dad this year.