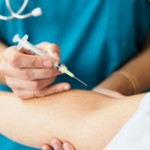 We’ve decided to take it one step at a time. A simple doctor’s appointment doesn’t mean much. After all, it could take us years before anything baby-shaped happens, given our circumstances.

My doctor is the son of Mr Eavis, the man who owns Glastonbury festival, or at least the fields on which it’s held. I think he looks a lot like Harry Hill. Dr Eavis referred us straight up to Bath Fertility Clinic at the Royal United Hospital. No bloods, no check-up, no case history. Straight to the people with the babies.

One step at a time.

It was a 5-week wait until our clinic appointment, and without really thinking about it too much, I’d gotten rather excited. I was also anxious. Anxious to see if they’d actually do anything.

This was a genuine concern – I know you have to be below a certain BMI before they will consider you for IVF, but there are a number of things they can try before then and I wasn’t sure if those things came with a weight limit.

I’ve tried for years to lose weight. I’ve always been bigger than my peers, despite a lifestyle of moderate exercise and mostly-sensible eating. I have a sweet tooth, and am suspicious of anyone who says they “don’t really like puddings”. But when I compare myself to friends and colleagues, I don’t see that I’m that unusual. This is a delightful side-effect of Polycystic Ovary Syndrome (PCOS) – it can be very difficult to lose weight*. Some women with PCOS struggle to gain weight, but sadly I am in the former group. I would hope that any fertility consultant would be able to take this factor into account, but that didn’t stop me worrying.

On 23rd October 2012 we arrived at the clinic, a low-lying old building, hidden at the back of the hospital and almost overtaken by vines. The local radio was playing, much to John’s disdain, and just before he finally flipped and smashed it to pieces, we were called through. That’s the mercy of God.

Dr Walker (no relation) took my case history, and I was given an internal scan in one of these:

This revealed “textbook polycystic ovaries”, of which I was very proud.

But this wasn’t the worst bit. The worst bit was the blood tests. I’ve had some pretty bad experiences in the past, and despite all logic and common sense, I hate them. I suffer the closest thing to a mind-body dissociation when I’m having them done. My mind is fully aware that there is nothing to be feared, but my body disagrees. Violently. I nearly kicked my own mother on one blood-test occasion. So this time I made sure John came in with me. He gently told me that I was a big baby, and to stop whining.  That seemed to help control the worst of my protestations. And he got me a muffin afterwards**.

Dr Walker prescribed me a drug called Metformin, which I had hoped he would. It’s an anti-diabetic drug that lowers the amount of insulin in my blood (see footnote*). As the levels of sex hormones in the body are dependant on multi-factorial things – including how much blood insulin there is – this drug holds the potential to regulate all my hormone levels out and let me ovulate as normal.

So, after all of this, I am very hopeful that things should get moving. I’ve already started taking Metformin, and there is no obvious reason why this drug shouldn’t work. We’ve another appointment at the clinic in January, where they may give me an additional drug (Clomifene) to stimulate ovulation, if we’ve had no luck by then. One step at  a time.

In the meantime, John gets to have special thoughts into a tube.

*Insulin is the main reason for this – it signals cells to take up blood sugar. PCOS is linked to increased insulin resistance, which means that your body has to produce more of it for your cells to take notice. More insulin in the blood = hunger. Hunger = larger appetite. Larger appetite = fat. But I just said that I didn’t eat excessively, so there must be more to it than that? There is. A high level of insulin in the blood causes the body to primarily shuttle the sugar into fat cells rather than muscle.  That’s the science in a nutshell. Oh, and more insulin means your sex hormone levels are all messed up too. So you can see how it could be argued that the deregulation of insulin causes PCOS.

By the time my operation came round I was overdue a period. Even by my ...