The Birth, And Beyond – Laura’s Perspective 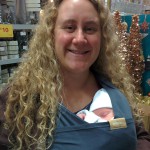 Oh wow. I’m not quite sure where to start. Any of you who follow me on Twitter or Facebook will no doubt have figured out by now that I have given birth (and feel free to unfollow me for a while if the constant baby pictures are annoying you! It turns out I am that person). John has already given his account of the birth, and we thought it might be an interesting contrast for me to give mine. So here goes…

I had been so very nervous of this event for the last 9 months, and for a while before that too. The idea of this very painful, inevitable event occurring, over which one has absolutely no control, filled me with dread. Despite the NCT’s best efforts I was still very fearful come Due Day, albeit with a better idea of what ‘should’ happen.

As it turned out, Toby decided to make an appearance 6 days late. On that day I had both a pedicure and met a dear friend for hot chocolate. She gave me yellow roses. So it’s definitely either pedicures or hot chocolate or yellow roses that bring on labour. Forget curries and pineapples and sex. (Disclaimer: More research is needed to ascertain which was a more powerful inducer, but nevertheless I recommend all pregnant women from this point forward try all three, under the completely unproven assumption that one *will* work.) Things kicked off with dull period-like pain around 5pm on Thursday 30th Oct, and ramped up fairly rapidly from around midnight onwards. John has already filled in the details far more eloquently than I can, but suffice to say things developed a lot faster than I anticipated they would. By the time we got to the hospital I was already convinced that I couldn’t do this birth thing, and told John as much. He replied gently encouraging me, and delicately pointing out that I didn’t really have much choice.

I was scared we’d be sent home. I’d heard many tales of people heading into hospital too soon in labour and being sent away, and I figured we would probably jump the gun. But I could barely walk to the central delivery suite, and I was in a lot of pain with continuous contractions, so the thought of being sent away again was unbearable. “Don’t let them send me home!” I screamed at John. For some reason he didn’t think they would.

I was checked over, and everyone was very calm. Too calm. I WAS HAVING A BABY! Why was no one doing ANYTHING about pain relief? This hurt. Didn’t they realise this hurt? “When do I get the GAS AND AIR?!!!” I gently enquired of the midwife.

I was moved through to the delivery room, and from that point onwards I don’t remember opening my eyes much. Already 5cm dilated, I was pleasantly surprised at how effective the gas and air was for taking the edge of the contractions. Leaning against the side of the bed (upward, forward and open position – the NCT leader would be so proud of me), I peed on the floor. Well, I thought I did. I was told it was actually meconium, and its appearance would change our labour options somewhat. Meconium is the first poo the baby does after they’ve been born. Or at least it should be. It is thick and tar-like, composed of materials ingested during the time the baby spends in the uterus: intestinal epithelial cells, lanugo (downy hair), mucus, amniotic fluid, bile, and water. Mmmmmmm tasty! If the baby gets distressed during birth they can do this poo before time (we’ve all been there, right? Stress poo…). So, picture the scene – baby is upside down, with this tar-like icky poo going past his face. It has the potential to go up his nose and get onto his lungs.

And that is bad. Real bad. Life-threatening bad.

I knew how serious this could be, and I sort of assumed that we were now heading for a caesarean. However, this wasn’t the case – I was told I just needed to be monitored more. Specifically the baby needed to be monitored more. This ruled out any use of water during labour as electricity and water apparently don’t mix well (which by that point I didn’t care about as I didn’t want to be moved). I wanted to maintain my upward position, but the baby monitor wouldn’t work that way round. All I was really aware of was being flipped onto my back for various observations (I didn’t care what) more times than I wanted to be, and this position was uncomfortable.

The following events were perceived by me as thus: Attachment of probe to baby’s head; something about a scan and its taking numerous attempts to rule out breech baby; something about blood oxygen and more discomfort for me as they took a blood sample from the baby; continuous contractions and the urge to push; being told not to; doing it anyway cause I couldn’t not do it; something about dilation; THEY TOOK THE GAS AND AIR AWAY; pushing; pain; John getting excited; male doctor fiddling around; a lot of pain (this was them fitting the ventouse); more people in the room; stirrups (oh yes); more pain (I want the gas and air back!!); I REALLY can’t do this; baby.

It was over. and suddenly there was this screaming purple thing on my chest and I saw my baby boy for the first time. Wow. I’m crying just thinking about it now. He opened his eyes and looked at me and I fell in love. John was stood by in tears, and the three of us breathed there together, in this bubble of new life and relief and overwhelming overwhelmedness. I couldn’t believe it was over. I had no concept of time, and to me it felt like it had all happened so fast. I couldn’t believe it when I overheard “time of birth, 6.48am”. The doctor was finishing up (I may have shouted at him a bit for his sharp suture action, and got myself a second dose of local anaesthetic), and I even got to see my placenta (much to the confusion of the doctor – Sara and Margaret, you’d have been proud!). Then the hustle died down and it was just the three of us in the now-quiet delivery room.

I had done it.

I had really surprised myself.

I felt joy and relief in almost equal measure. That was it, the child was out, the looming birth event I was so scared of was behind me, and our son was here. Alive. Perfectly formed. November has been a blur. The shock of having to look after a tiny human was eclipsed only by the pains of labour. Gosh, it’s hard work. People tell you this. They warn you the first weeks are the hardest. But what is hard for one person is not necessarily so for another – it’s a rather relative measure. And so I think you can only know how hard it will be for you once you’re in it. And all babies are different too. As new parents, we have no frame of reference. We don’t know if our child is particularly easy going, or a little beast-monster. And this lack of reference point is something I’ve found the hardest.

“Give him the infant Gaviscon if he’s bringing up a lot of his milk and seems in distress”…All he does is cry when he’s hungry, how do I know if that is distress or just hunger? How much milk is a lot?

It’s all a bit vague. And then there’s the conflicting advice from different midwives. The midwives have been totally awesome, and we’ve been very blessed to have excellent care from them followed by a lovely health visitor, but my desire for measurable outcomes and straightforward answers is in direct conflict with the decidedly unscientific job of baby-raising. I think more health professionals should be encouraged to confidently admit when they don’t know the answer, and that it’s OK.

[As an aside, I will write a separate rant about the whole weight-loss-formula-saga, as I think it is an important topic that can cause so much distress to new mums.]

The continued sleep deprivation is possibly the hardest thing for me. Baby Toby loves the cuddles, and after an initial period of sleeping through the night in two x four-hour stints, he has now decided that he will only sleep if held. Cue long shifts and one amazing husband who will take Toby for extra hours so mummy can sleep. We are trying new ways round this, and the last few nights have been better, but things change daily, so I’m learning to be flexible…

But above all these teething problems is the overwhelming sense of pride and love for this new creation. This culmination of years of hoping and fearing and crying and excitement and disappointments. Toby James, you are very wanted and very loved.

Welcome to the world little man.