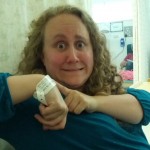 Working in a hospital as I do, I find it quite a surreal experience to be on the other side of the imaginary patient-professional wall. There is, at the same time, something both comforting and terrifying in knowing how an operating theatre works, and that the people in it are mere mortals. I am familiar with the protocols of calling a patient down to surgery and the anaesthetic induction thereafter. I work with anaesthetists and registrars, and have joked with both about how Science is a far higher calling than either profession.

So to be lay on an operating table with my life in their hands was an odd feeling. It was made even odderer by the swirling room and happy drunk sensation I was experiencing after the first few mL of anaesthetic and relaxant.

We had been at the hospital for 2 hours, held at first in a super-hot waiting room with other day surgery patients, and later in the bay that would become my recovery boudoir. I hadn’t eaten since 8pm the night before, and it was now approaching 2pm. John was hungry.

The anaesthetist visited us first, after the dismissive nurse had successful asserted – through both word and deed – that this was just a usual day for her, and that we were supposed to find the whole experience  as undaunting as she did.

Mr Anaesthetist very carefully explained what would happen, and I confessed to my wimpish fears at having a line inserted in the back of my hand.

“Do not fear, fair maiden!” he said. “For I shall freeze your pretty hand with ice and thou shalt not feel a thing.”

“That sounds great,” I replied. “Thanks very much.”

He took a look at my hand, and got so excited by the vein therein that I thought he would kiss it. Apparently he was “in to veins” and mine was a good, juicy one. So I had that going for me. Next I met the registrar who would be performing the surgery. She was pretty. Almost too pretty. But despite her female condition and inherent prettiness, she seemed to know what she was doing. They were going to take a good look at my fallopian tubes by injecting a dye in through the business end and seeing if it came out the ovary-end of the tubes. This is also known as a tubal patency test, and is used to see if there are any obstructions [for any who were previously unaware, the fallopian tubes are not fixed to the ovaries, but rather linger near them, as a sort of egg-catcher]:

“To assess tubal patency, a blue dye (methylene blue) is injected into the cavity of the uterus via a special plastic or metal cannula placed in the canal of the cervix. The cannula also allows the surgeon to move the uterus in any direction. Sometimes an additional probe is inserted to move the bowel if it is preventing a clear view or to lift the tubes and ovaries and so facilitate the inspection of the pelvis. If the tubes are patent [not blocked] they first become slightly distended [swollen] as they fill with the dye. The dye then spills out through the open ends of the tubes into the abdominal cavity.

If the dye does not enter either tube where it joins the uterus on each side, this could indicate an obstruction. The canal of the tubes is so narrow at this site that it is only just visible to the eye and may have become permanently blocked by previous inflammation and infection or temporarily blocked by muscle spasm. Sometimes the dye only passes through one tube and fails to fill the other tube at all.”

They would also have a good look around for any endometriosis and other abnormalities while they were in there.

Finally, as previously described, they would burn some holes in my ovaries (delightfully referred to this time as “ovarian drilling”), in the hope to stimulate an ovulatory response to the Clomid. Ovarian drilling. (This is not my ovary).

When my time came I donned the sexy hospital gown and bed socks, and was duly wheeled down to theatre. John came with me as far as he could, and then went for an overdue lunch. I’m sure he’ll write about the poor quality of what he found in the hospital restaurant at a later date.

I know right, I should have forewarned you…

The theatre staff were very lovely and reassuring. After a brief and incoherent chat about the quality of their theatre lights compared to those at the BRI, I was unconscious and they did their thing.

I awoke in the recovery room, and was asked about my pain, which was minimal. They dosed me up on everything they could give me, including oral morphine (mmmmm sweet!), and wheeled me back to the recovery boudoir on the ward. But not before I had spoken with Ms Registrar.

As I fought to keep my eyes open, she told me that it had all gone very well, that my pelvis, uterus and fallopian tubes were “perfect” (PERFECT), and that I should book to see my consultant in 6 weeks. At my next period I should re-take 150mg of Clomid and schedule a day 21 blood test to see if the drugs work this time (post-drilling). The diagnosis of bilateral PCOS (on both sides) was confirmed, but otherwise everything was normal. Normal. Phew.

I was monitored every 15 mins on the ward, and a few hours later I was allowed to go home. John was a great nurse, and after 7.5 hours of patiently waiting around, he faithfully wheeled me to the car. Moving around was a bit sore, but I didn’t have any of the shoulder pain I’d been fearing and I was so doped up that my abdominal pain was negligible.

I am so relieved that it’s out of the way, and that things are fine. And I have been overwhelmed by the love and support of both friends and strangers alike. Some wonderful friends from Bath (most of whom we know through church) have embarked on a food rota to feed us every night this week with super-yummy goodness, and have offered any other help we might need on account of our having just moved house 6 days before the op. You are all stars. Our church is supper-supportive, and I feel so blessed to be surrounded by people who really practice the love and generosity that they preach. The two days  following the operation were spent feeling a bit sore and bloated. I have three wounds on my belly that are healing nicely. There was plenty of farting as my body reabsorbed the CO2 they’d pumped in to make space for the camera in my abdominal cavity. Oh yes, I am super-sexy right now. The pain meds have worn off and the bruising is starting to come out. Getting up and down from the bed/sofa is difficult, and I feel like an arthritic senior citizen hobbling around the house. But I’m just on paracetamol now, and still haven’t experienced any of the dreaded shoulder-tip pain, for which I am very grateful.

I was really fearful of this operation, particularly the uncertainty of how much it’d hurt afterwards and the lack of control I’d have throughout the process. It is daunting to be at the mercy of an anaesthetist and registrar you’ve never met before, and as a result I have a new-found empathy for the patients I work along side every day. Mine was really a relatively minor operation compared to those I see daily – bypass and valve replacements, congenital heart defects, and alike. These are very brave patients, and very skilled medics.

I’m not really sure what else to say at this stage. Thank you to everyone for your love and support, and especially to a dear friend who has informed me that this procedure is far worse than IVF, in terms of pain and discomfort. So whatever lies ahead, I know I can overcome it.

Finally, after months of  , this month I saw a Clearblue smiley face on my ...