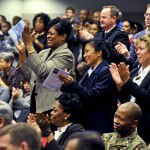 After believing the drugs were working, last month I seemed to have hit a road block.

Having had no periods for the last 2 years, the Metformin I am taking has faithfully prompted my cycle for the past 3 months.

But this time round, and frustratingly just when I was being tested for ovulation, things seemed to falter.

I recently found out that it is possible to have a period without ovulating, so although all seems to be going well for me, the doc is keen to ensure that all systems are working properly. This month he tested me twice for increased levels of progesterone, which involved two blood tests that I totally aced, and I also embarked on an expensive series of home testing ovulation kits.

In a normal cycle, progesterone levels increase after ovulation. They stimulate the womb lining to thicken in preparation for the embedding of any potential embryo. As Wikipedia puts it:

“Progesterone converts the endometrium [womb lining] to its secretory stage to prepare the uterus for implantation [of the embryo]…If pregnancy does not occur, progesterone levels will decrease, leading to menstruation. Normal menstrual bleeding is progesterone-withdrawal bleeding.

If ovulation does not occur and the corpus luteum does not develop, levels of progesterone may be low [before menstruation], leading to anovulatory dysfunctional uterine bleeding.“ Alongside this, I also tested myself daily for ovulation using the home testing kit from Clear Blue. This tests your luteinizing hormone levels (LH), which stimulates your ovaries to release an egg. LH levels peak on your two most fertile days.

As I was unsure which days of my cycle this might be, I tested from day 10 to day 45 (an average cycle is only 28 days long…), and these tests aren’t cheap!

The Clear Blue LH tests show this happy face of biological success when you reach your LH surge:

But this is what I saw, every day: Which was a bit sad.

I was starting to feel despondent  This was the first time since beginning medication that things weren’t going to plan. When the doctor called me with the blood test results, we weren’t surprised to learn that my progesterone levels were low, showing no ovulation. My period still hadn’t come, and a quick pregnancy test ruled out a baby.

So I was delighted when the doctor recommended I go on a new* drug to stimulate ovulation. This new addition to my bathroom cabinet is called Clomifene, or Clomid.

How this drug works is a bit more complicated. In a nutshell…

Oestrogen is produced by follicles in the ovaries. When the oestrogen level gets high it binds to receptors in the brain (the hypothalamus) to tell it to stop producing LH (i.e. “Okay okay, we’re ovulating down here, give it a rest LH!”).

My oestrogen levels are effectively higher than they should be, because women with PCOS have many oestrogen-producing follicles in their ovaries (“poly-cystic” means lots (poly) of follicles (cystic) that produce half-matured eggs). This means the production of LH is really switched off (SHUT UP HYPOTHALAMUS!).

Clomid works by blocking oestrogen from binding to its receptors in the brain. This tricks the body into thinking there is less oestrogen than there actually is, so the brain continues to produce LH. We already know LH causes ovulation, so boom – eggs are released and baby-making can commence! Ovulation normally occurs 6-7 days after a course of Clomid.

This is all well and good. However, there is one caveat: Clomid must be taken on days two – six of your cycle. This means you have to be having a period to be able to take it.

So, the prayers began…”Dear Jesus, erm, yeah, you know that lady you helped once who couldn’t stop bleeding? Well, it’s sort of like that, but only the opposite…”

And the good news: Today the prayers were answered! (Or biology did its bit) (or both).

So tomorrow I start the Clomid for 5 days. On a low dose to begin with, as it increases your risk of having twins. I will have another blood test (pah!) at day 21 to see if it is working to make me ovulate, and if not the doc will increase my dose. I read somewhere (scientific I know) that 80% of women ovulate on Clomid, and it increases your chances of conceiving each month from a “normal” 25% (assuming you have no fertility issues) to 30%.

Also, you get hot flushes as a side effect, so if you see me walking around in shorts and a bikini top in mid-March, please don’t stare. I’m just hot. You think these buns are hot are and cross?…

*New to me, not new to the market – Clomid has been around for ages and is the most commonly prescribed fertility drug.

Well, after my first month on Clomid, little seems to have happened. The home-testing ovulation kits ...

Okay, so this is a bit of news to add to our site about trying ...